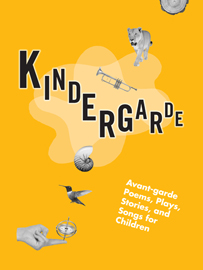 Avant-garde Poems, Plays, Stories, and Songs for Children has been selected as co-winner of the 2014 Lion & Unicorn Award for Excellence in North American Poetry

A formal announcement by Johns Hopkins University Press will be made in January 2015.

“A collection of original prose and poetry that ranges from thoughtful to provocative and from experimental to really far-out….a showcase…to encourage children to literally take their own pencils outside proscribed boundaries.” Kirkus

“…the array of poets stepping up to present avant-garde approaches to writing for young writers is unprecedented; the anthology is a gift to writers of any age.” Rain Taxi

“this anthology invites young readers, all readers, to not merely see the depicted worlds of the authors but to inspect, question, and remake those worlds. Who needs “follow the instructions” anyhow? Why not write them? Why not erase them?” Carolyn Hembree, Jacket2

Reviews, Features, and Events for Kindergarde

Kindergarde is available through SPD and Amazon.