Marci Nelligan’s work has appeared in Jacket, the Denver Quarterly,

The New Orleans Review (poetry feature), Chain, Word For/Word, How2, Dusie, Unsplendid, and other journals. She has published two chapbooks and is the co-editor of an interdisciplinary book on Jane Jacobs, titled “Intersection” (Chain Links Books, 2008). She teaches creative writing at Franklin & Marshall College. She lives in Lancaster, Pennsylvania with her husband and daughter. Infinite Variations was published with Black Radish Books in 2011. Nelligan’s second full-length collection The Ghost Manada was published Fall 2016. 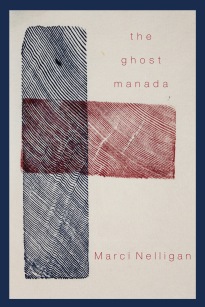 ce Praise for The Ghost Manada

Marci Nelligan writes: “I don’t know what I am but I am not this body only; every woman a distance from her skin by some measure of the measure of the world.” With Cormac McCarthy’s Blood Meridian as both inspiration and site of interrogation Nelligan considers erasure and displacement of the female body in the ethos of the West. Through alluring lyric and visual poetics she opens doors, hinges, utterances. Read The Ghost Manada to learn “why witches salt their thresholds.” This haunted text resides where words break open “like feathers ripped from breasts, like beds inside beds” . This book forges a passage and invokes the gestational, the birth of a necessary equity.—Laynie Browne

Marci Nelligan’s Ghost Manada is a book of insistent absence in conversation with her own shade songs. The book is an intertext of experimental lyrics speaking to and through Cormac McCarthy’s Blood Meridian and the spirt of Emily Dickinson. Nelligan dives into the wreck of an American mythos of unforgiving darkness, and if that were not enough, she also finds her name does not appear there. “As in this telling, woman lurk in thresholds, part captive, part threat.” Ultimately, these affecting meditations do not wait “for the ire to eat up all the air.” This is the space of the book, one that wasn’t there before Nelligan created it.—Thomas Devaney