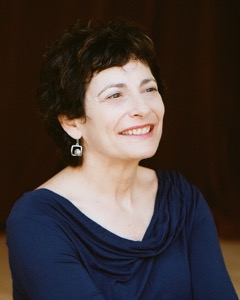 Barbara Tomash is the author of three previous books of poetry, Arboreal (Apogee 2014), Flying in Water, which won the 2005 Winnow First Poetry Award, and The Secret of White (Spuyten Duyvil 2009). An earlier version of PRE- was a finalist for the 2016 Colorado Poetry Prize and for the Rescue Press Black Box Poetry Prize. Her poems have appeared in Colorado Review, Denver Quarterly, Web Conjunctions, New American Writing, VOLT, Verse, OmniVerse, Witness, and numerous other journals. She lives in Berkeley, California, and teaches in the Creative Writing Department at San Francisco State University.

Publishers Weekly review of PRE-: “With great dexterity and a touch of alchemy, Tomash (Arboreal) examines lexical semantics through contemplating series of prefixes and what each is capable of prompting. Tomash refrains from revealing the full words that she conjures from each prefix; the poems cohere in the manner of a collage of various incomplete definitions. It’s an absorbing linguistic expedition that will leave readers puzzling out the words being delineated and their relationships with each other…. Enigmatic yet welcoming, Tomash’s poems illuminate hidden relationships buried in language.”

All language is a game played in and through relation. PRE- takes seriously the playful question— what happens to language when words think for themselves?—and attempts to make that impossibility possible. By ingeniously uncoupling prefixes from their stems Barbara Tomash divorces ordinary words from their workaday labor of denotation. New and unforeseen thoughts form relationships in the gap after the prefix and its hyphen—“meaning, a small cavity, an inner space.” Indeed, we emerge from each of these meticulously notated poems as from the interior space of meditation: to a renewed faith in how we make meaning of our relation to the world. Ultimately, this book is “a setting into motion/with ceremony,” by which I mean it is a praise song to the generative power and startling ecstatic plasticity of language.—Brian Teare, author of The Empty Form Goes All the Way to Heaven 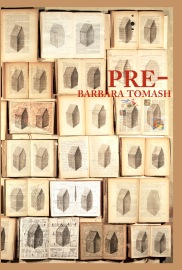 Tomash’s terrific new book PRE- reminds us of Emerson’s great notion that every word was once a poem. Here, not just every word, but every part of each word, in particular, the prefix, where we begin and begin. Deftly, brilliantly, with her characteristic wit, intelligence, and adventurous imagination, Barbara Tomash opens up the word and the world in these poems.—Gillian Conoley, author of Peace

as when a specific color is felt in one part of the body when another is stimulated : fine silk : a fleshy hollow : a set or table of syllables of lesser sonority : subtle, tricky : to sink in : collapse : in accordance with the rules : in this befallen people of wealth and influence : in this broken having the sepals united : the arrangements of words on the last half of the beat : example : either they or I am wrong